Keeping Ferrets Indoors – All You Need To Know 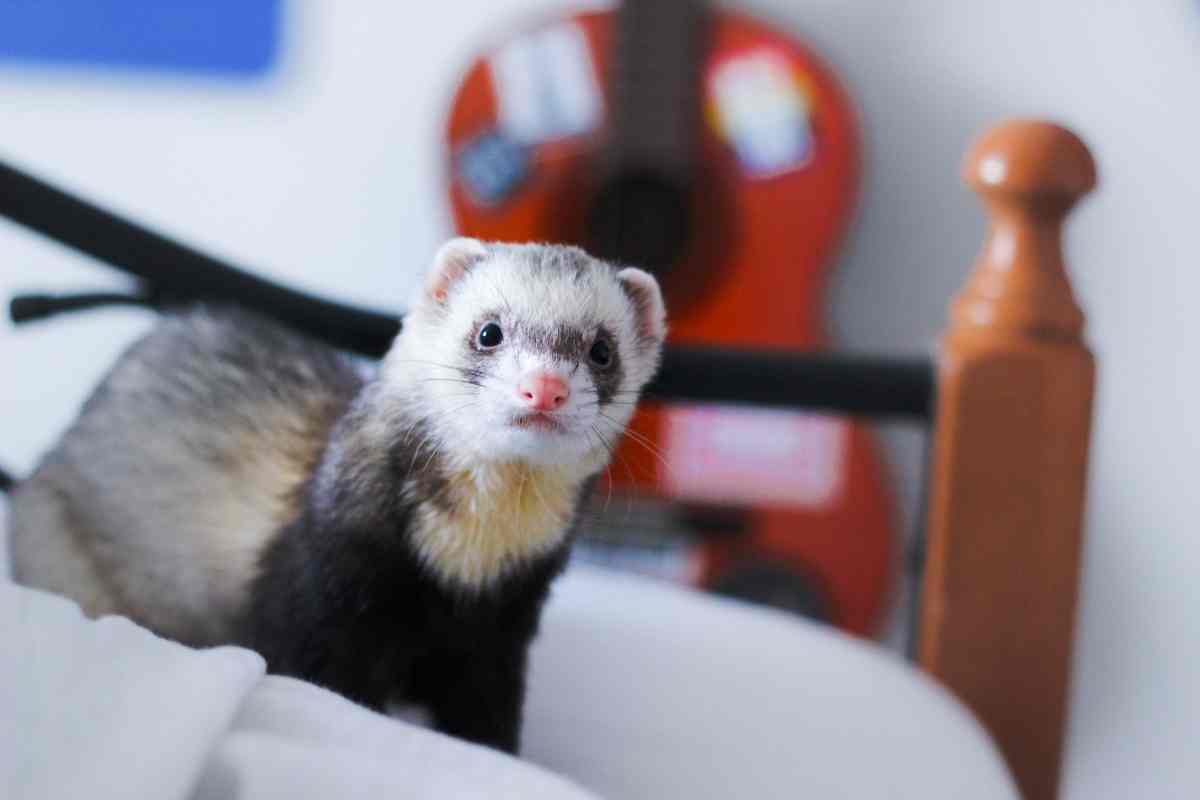 One of the things that people instantly associate with ferrets is that they have a pretty strong smell. For this reason, a lot of ferret owners choose to keep their pets outside but if you really want your ferret to be a part of the family then there’s no better place for him than in the house with you.

But is it possible to keep ferrets indoors? Of course, it is.

However, if you are going to do this then you will need to make sure that your pet has a safe and suitable environment and that his presence doesn’t interfere with the day to day running of your home.

In this guide, we will be telling you everything you need to know to successfully keep your furry friend indoors.

Can I Keep My Ferret Indoors?

It is more than possible to keep a ferret indoors even though they are usually viewed as outdoor pets. However, there are options that you will need to consider when choosing how to house your pet.

Some people will provide them with a large enclosure or even a room of their own so that they are safe and contained but still have a good degree of freedom.

However, there are some ferret owners that are happy to have their pets running free around the house. This is far less common and requires a lot of work ferret-proofing the house so isn’t something we would actively recommend.

If you are keeping your ferrets in some kind of enclosure, it is vital that you give them plenty of cage free time every day.

You’ll likely want to supervise your ferrets as they enjoy their free time to keep them safe and make sure that they don’t cause any damage to your home.

While it can be time consuming, we cannot stress enough the importance of daily exercise especially considering that ferrets are prone to health conditions such as joint problems and obesity.

But both of these conditions can be avoided with simple daily exercise. 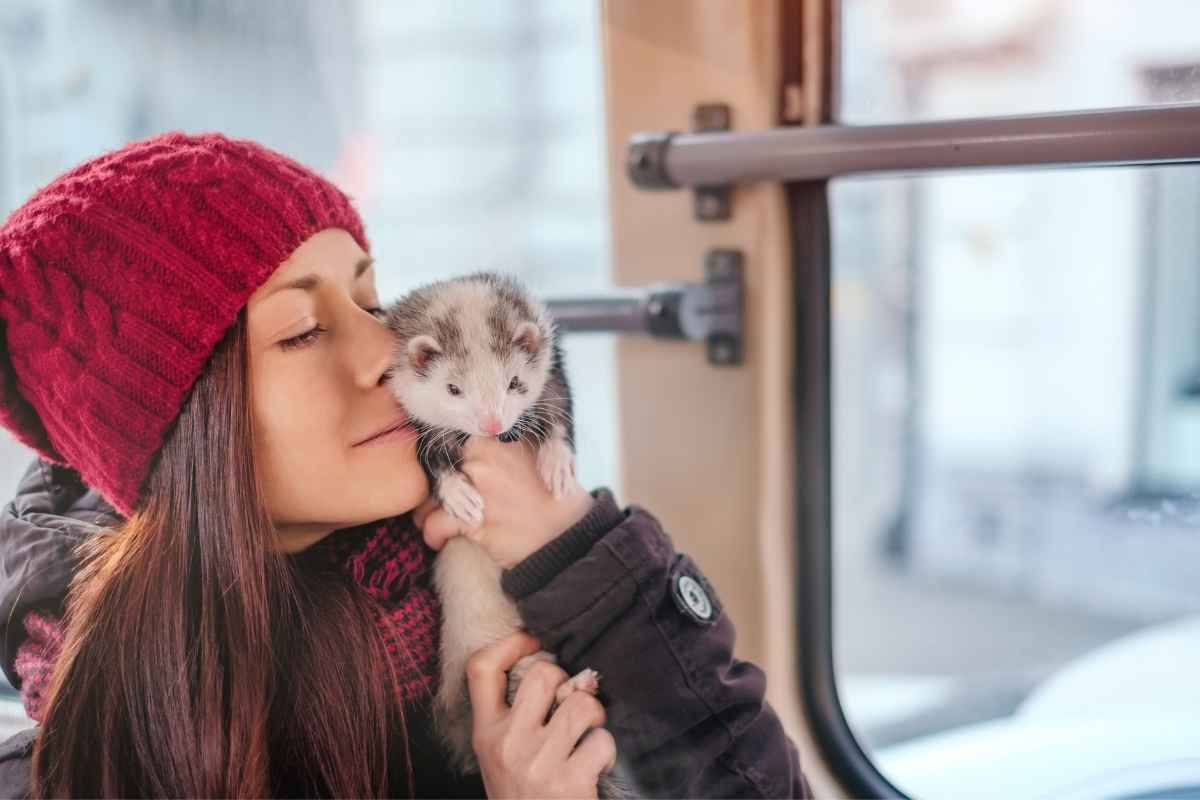 Now, just because you can keep your ferrets indoors, this doesn’t necessarily mean that you should keep them indoors. There is the small matter of their pungent odor.

For some people, this isn’t a problem and if you keep your house clean and well ventilated, this can reduce the odors; although, we will look at ways of limiting the smell later.

In any case, it is likely that you will become a little bit nose blind to the odor but anyone that comes into your house will certainly pick up on it. It is something worth considering even if it isn’t a deal breaker.

What Amount Of Space Does My Ferret Need?

Ferrets may not be the largest animals in the world with adults growing between 14 and 16 inches depending on gender and whether they have been neutered.

For this reason, you will need to provide your ferret with as large a cage as possible; the bigger the better as this will prevent him from being restricted in his movements.

You should make sure that the cage has enough room for your ferret to walk around and make comfortable turns. It should also be big enough for him to fully stretch out.

You will notice that your ferret loves moving things around his cage and playing with items so do make sure that he has plenty to do while he is in there.

You might provide tunnels or boxes and lots of toys to keep him entertained when you aren’t there to watch him outside of the enclosure.

What’s more, you must ensure that the ferret has somewhere safe and cosy to sleep. The area should be comfortable but should not contain bedding that could cause the ferret to overheat which is something to which they are incredibly prone.

If you are going to keep your ferrets indoors, the last thing you want is for repeated accidents which will result in a lot of cleaning and hard work for you. The good news is that ferrets are pretty easy to toilet train.

They typically like to toilet in a corner so placing litter boxes at the cage corners and in any rooms that they may be playing in will ensure that they become used to peeing in the box.

You’ll need to line their litter box with an absorbent material such as shredded paper. However, small animal paper pellets are often the best choice as these will often also absorb odors.

One of the key considerations when housing your ferrets indoors is that they must be somewhere safe. You will want to keep them away from electrical cables and outlets as well as away from things like diffusers and chemical products.

This is one of the main reasons that we wouldn’t recommend allowing your ferret free run of the house as when left unsupervised, there is a risk of injury. These animals are incredibly curious and will not think twice about exploring potentially dangerous situations but this characteristic also means that they rely heavily on interactions between one another and with their owners.

Moreover, ferrets are very likely to chew so if you have any exposed electrical cables, there is a very real risk that your pets will nibble them.

Small objects may be swallowed and even if they don’t pose a choking hazard, they could cause problems further down the digestive tract, blocking it which would require veterinary treatment.

While your ferret will enjoy the indoor lifestyle, he does require sunlight just like you and I. For this reason, you might allow your ferret some outdoor supervised playtime in an enclosed space such as a gate courtyard or in a rabbit run. If this isn’t possible, make sure that natural light is abundant in the room where you keep your ferret.

One of the biggest problems in keeping ferrets is that they do give off a bit of a stink. But don’t let this put you off housing your cute little furry friend indoors. There are several ways that you can reduce the odors associated with your ferret.

By far the best method for controlling ferret odors is to have your pet neutered. This will practically eliminate the odors but there will be some that remain.

However, this should mean that you only need to bathe your ferret around once a month. That said, some ferrets may not enjoy being in the water so you will need to work with your pet so as not to stress him out.

If neutering is not an option then there are some other things that you can do. Keeping the cage clean is imperative and you should aim to clear any soiled items every day as well as replacing litter and cleaning the tray.

Every week, be sure to remove any bedding and discard this if it is disposable or wash things like blankets. On a monthly basis, you will want to completely empty the cage and disinfect it.

It is also vital to ensure good airflow throughout the home so that odors cannot build up.

Ferrets are popular pets but many people opt to keep them outdoors largely because of their musky odor. But if you want to bring your pet to live in the house, there is no reason that you shouldn’t.

You will need to be prepared to be meticulous in your approach to cleanliness and hygiene and you’ll have to dedicate a lot of time to supervising your pets when they are out of the cage.

If you can do these things, then you should easily be able to move your ferrets indoors without too many issues. 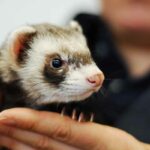 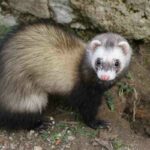