Ferrets are sociable and friendly with humans and even other ferrets. However, they are also territorial regarding their possession. Also, you will witness occasional accounts of ferrets fighting for dominance. These fights might begin as a small playful fight but end up as a serious fight.

If you have two ferrets, you will have to learn how to stop your ferrets from fighting. I mean, these creatures are known to fight for just about anything. This should not disregard the fact that ferrets can also become the best of friends with each other.

In this article, I am going to briefly discuss several types of fighting you will witness when you have more than one ferret. These include the following: 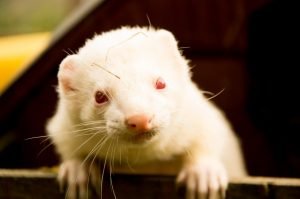 What is ferret dominance fighting?

While ferrets will get along well with each other, it is natural for one ferret to prove that he/she is the alpha. The ferret will act aggressively towards the other ferret. In most cases, dominance fights occur after exciting playful fighting.

However, the dominance fight is the only way ferrets will prove who is better than the other. Now, the aggressor will bite and even drag the other one mercilessly in the cage.

It should not be as concerning since it is only natural for ferrets to fight for dominance. Luckily, the ferrets will only attack each other on the neck. They have thick skin and thus will rarely suffer main injuries.

Eventually, the dominant ferret will pin the other down and establish their authority. Dominance fighting is common between ferrets of the same gender living in the same cage.

Other types of ferret fighting

As I indicated above, there are several types of fighting between ferrets. Below, I will briefly describe each one of them before I proceed to talk about how and when to stop ferret fights.

Ferrets can be extremely friendly and playful. They play with you, their favorite toy, and other household pets and between themselves. However, it is not always that your ferret will get along well with your cat or dog.

Some ferrets will pick fights with dogs. Given that they are all from different species, it is difficult for them to understand each other. These fights are not common but they do happen.

As I have mentioned above, ferrets will fight with each other because it is fun. Even ferrets who are friendly towards each other will occasionally fight playfully and later snuggle up together.

This type of fighting is not meant to inflict pain. Rather, it is part of their play and they will both enjoy it. However, it almost always ends up a dominance fight. 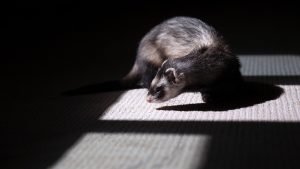 Once again, most ferret fights result from playful fighting. However, if your ferret is in a fight, or feels cornered, he will have the fight or flight reflex. Now, if your ferret cannot get out of the situation, which is their first go-to solution, then they will react defensively.

In such a fight, your ferret is out to do whatever it takes not to get hurt. Thus, it is one dangerous kind of ferret fight. Your ferret will pounce to bite his aggressor in efforts to get out of the situation.

However, if this happens during a dominance fight, the other ferret might go on until he proves that he is the best. In most cases, you will have to check and treat the wounds from biting and scratching.

This is the kind of fight to communicate that a ferret is not welcome. It could happen when introducing a new ferret in your home. The old ferret might attack the new one since it feels as if he is crossing boundaries.

Thus, it is important to introduce ferrets to each other properly. In this type of fight, your ferret is going to be ruthless. You should stop the fight as soon as possible as this could end up in nasty injuries from scratches and bites.

You must separate them as soon as possible. Check for any wounds on your ferret’s body once they settle down. You must allow them some time and introduce them to each other properly.

Breeding ferrets is not an easy process. It can be painful to watch the mating process as the male drags the female around the cage. However, it is their ritual and there is nothing you can do about it.

However, if there are several male ferrets who want to mate with the female, they will pick up a fight. This type of fighting will go on until the dominant male wins and the mating process begins.

To prevent such, I suggest you keep your preferred pair of ferrets to breed together. Pick a male to mate with your female ferret rather than putting two or more male ferrets with a female in season. 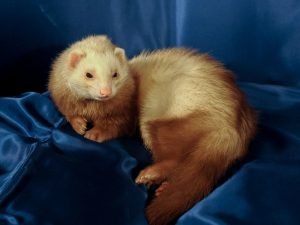 How to stop ferrets from dominance fighting?

Above, I have listed the main types of ferret fights you might witness. However, dominance fighting can result in injuries and cuts. Therefore, it is important to separate ferrets who are fighting as soon as you catch them.

However, I must warn you not to get scratched or bitten when separating your ferrets from fighting. You should have thick gloves or refrain from using your bare hands to separate the ferrets. Also, keep away from a ferret who is hissing as he is very angry.

To separate fighting ferrets, use a spray bottle or squirt gun. Fill either with water and spray the ferret who seems more aggressive. This should buy you enough time to put him in his cage. However, if he is hissing and screaming, you should concentrate on getting the other ferret out of the situation immediately.

When picking up a fighting ferret, always use the scruffing method. It is the same way a mother ferret would carry her kits if they are fighting or to move them easily.

Put your ferrets in different cages and allow them to cool down. Then you can check them for wounds and treat them respectively. If this is an exclusionary fight, you will need to do the introduction once again, and this time you must ensure that your ferrets get along with each other.

Should your ferrets be bleeding from a fight, treat them immediately? Also, f you are worried about open wounds, you may consult your vet.

Ferrets will occasionally fight over tiny issues. For instance, they can be territorial over their feeding bowls, beddings or even toys. However, dominance fighting in ferrets can be dangerous ground. The aggressive ferret will initiate a fight just to prove that they are the alpha.

Before you let ferrets move in together, you should only let them play under your supervision. This way, you can tell whether they are friendly with each other. Within a few weeks, they will establish a relationship. This does not mean that they will not occasionally fight, and you will need to separate them as soon as possible.

If your ferrets do not seem to get along with each other, allow them some time apart and introduce them to each other. I have previously written about how to introduce ferrets to each other properly and I hope it will help you establish a strong bond between your two furry pets.

As can be seen in the About Us page my son Bobby and I have been lifelong ferret owners and breeders and have experienced every problem and question that may come up.

As ferrets are our passion we have compiled our very own ferret care guide which took us 6 months to complete. It is perfect for new and seasoned owners alike and should be by your side.

You can have a look and get immediate access to it now by Clicking Here.

To also help other ferret owners select the correct items then we have the hand-picked items that we indeed use and are all available from Amazon. See them here. 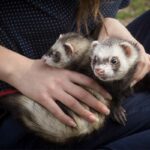 Do Ferrets Hibernate? A Helpful and Useful Guide 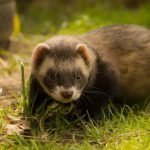