Do Male and Female Ferrets Get Along? 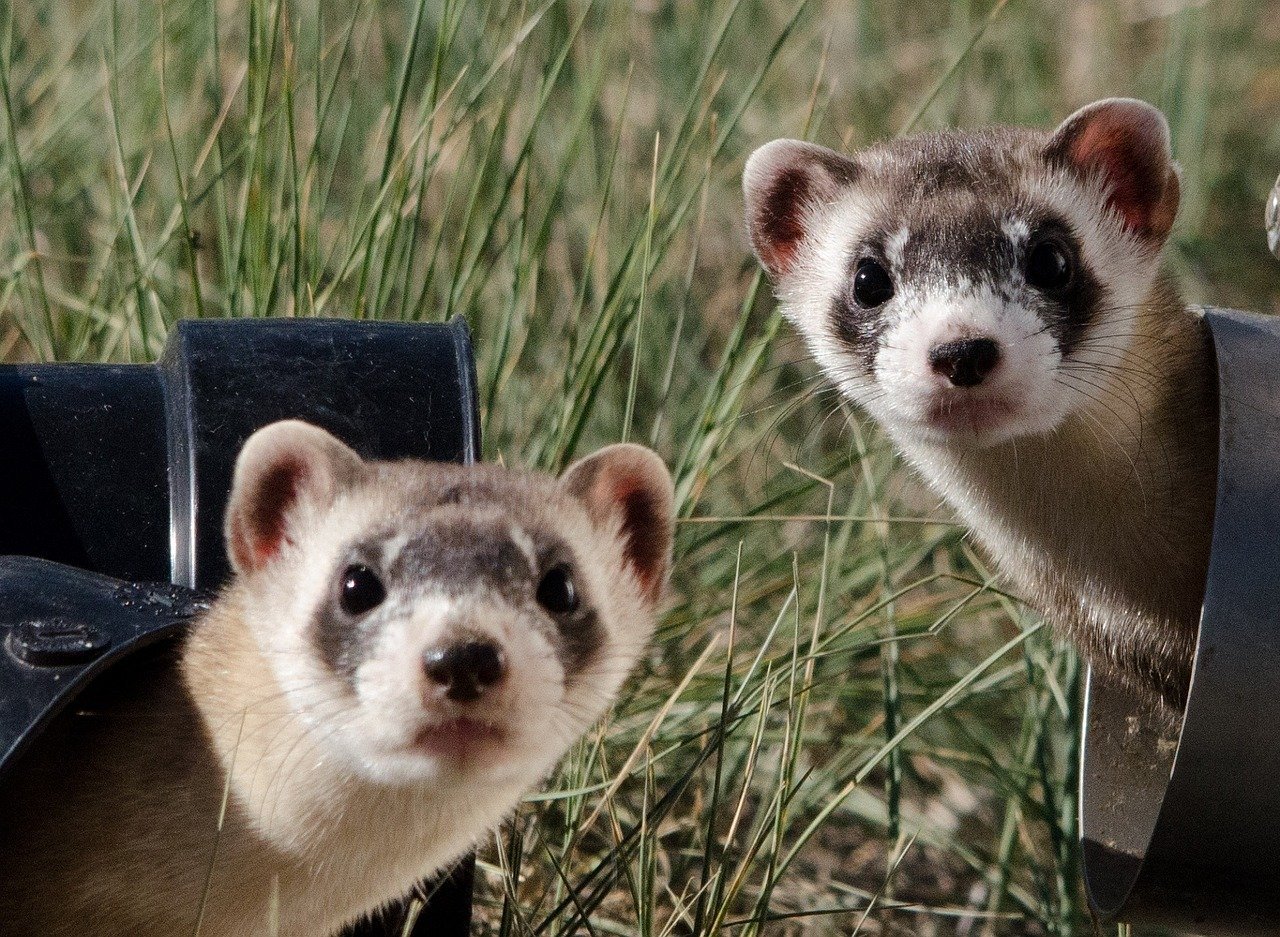 Do Male and Female Ferrets Get Along? — Things to Know Before Getting a New Pet

We all know that introducing ferrets to one another is a tricky business. But what happens when one of them is a boy and the other is a girl? Does that make things easier and do male and female ferrets get along at all?

Let’s answer these questions and see what the best way to introduce ferrets to each other is. 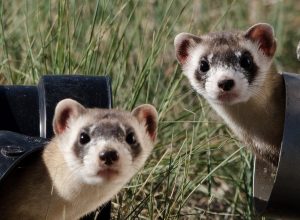 The Differences Between the Sexes

To start, male and female ferrets are somewhat different in size. Most males can weigh up to 7.7 lbs, while the females usually don’t go past 5.5 lbs. But the biggest difference between the two is what happens when each sex goes into heat.

Female ferrets reach sexual maturity when they’re only 4–6 months old and they’ll continue to stay in heat until they mate. Also, if they don’t mate, they can develop a serious condition called aplastic anemia.

On the other hand, male ferrets reach maturity a bit later than females, at around 10 months or so. But once they do, the boys can become extremely aggressive and territorial towards other animals and people. They’ll also start biting even more than usual when they’re in heat.

That’s why when we buy or adopt a baby ferret, they’ve usually already been desexed. However, if a ferret hasn’t been desexed, it’s best to do it when they’re between six to twelve months old.

Do Male and Female Ferrets Get Along?

The most important thing to know about ferrets is that they’re extremely social, and vets always recommend having more than one. If we had only one, we’d have to give it extra attention during the day.

But ferrets usually respond much better to each other when they’re still babies or kits. So for those who don’t have a ferret yet, but are considering getting one, we would recommend getting two right away.

Once they’re older, same-sex ferrets have a harder time playing nice with each other, especially the girls. Also, introducing an adult male ferret to a female one can cause the former to become extremely aggressive.

In fact, male ferrets will start biting the females so hard that they draw blood. So to answer the question, do male and female ferrets get along? Yes, they do, but only if the male has been desexed. 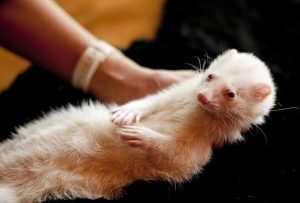 Before we bring the two ferrets in the same room, it’s key that we take the new one to a vet first. The vet has to make sure that the pet is disease-free and it doesn’t need any medication or shots.

What’s more, they have to verify if it’s safe to introduce the new ferret to the old one or if they’ll try to mate. If the new ferret is male, the doctor will probably suggest neutering him.

Of course, if the vet prescribed some medication for either ferret, we should hold off on the introductions until they’re both healthy.

Also, before the two ferrets face off for the first time, it’s best to let the new addition explore the home on its own. While it’s doing that, we should put the other ferret in a separate, non-communal room.

After a few days of being in our home and sleeping in a crate, we can take the bedding from the ferrets’ cages and swap them. By doing so, the two pets can get used to each other’s scents.

How to Introduce Ferrets to Each Other

Once it’s time for the male and female ferret, or hob and jill, to meet, it’s best to go with a neutral location. We should choose a spot in our homes where the older ferret doesn’t usually spend too much time.

However, it should never be close to their cages, because they might get aggressive, and start fighting. 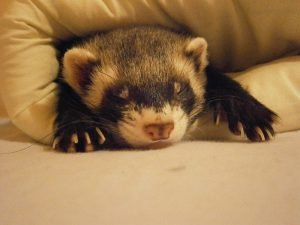 While holding both of them, we can let them sniff each other, but they shouldn’t be touching yet. If they both start extending their necks, it means that they want to make physical contact.

But if one or both ferrets starts pulling away or hissing, we should separate them right away. We can try doing the same thing the following day and they’ll probably have a better reaction.

If It Goes Well

Now that both ferrets have expressed the desire to get to know each other better, it’s time to let them play a bit. We can put both of them on the floor and let them wrestle and roughhouse a bit.

One thing to know about ferrets is that they love biting each other and it’s a sign of playfulness. But if one of them gets too aggressive or draws blood, we need to separate them as soon as possible.

Another great trick for making the ferrets bond is to use Ferretone or malt paste. Both of these products have a scent that ferrets enjoy, so they’ll start licking it off each other, instead of biting.

If It Isn’t Going Well

While we shouldn’t force a relationship between our ferrets, there are some tricks to make them play nice with each other.

If they’re hissing at each other but aren’t biting, we can gently pick one or both of them up by the scruffs of their necks. Scruffing will make it much easier to handle them and we can either put them back in their crates or in a time-out.

Another trick to get two ferrets to warm up to each other is to give them a bath. Since most ferrets hate getting wet, they’ll bond in misery, and start becoming friends.

Also, by giving them a bath, we’ll be getting rid of some of their natural scents and they’ll both smell the same. 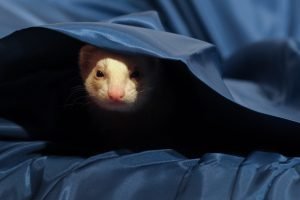 Another factor that’ll help answer the question do male and female ferrets get along, is how we nurture the relationship. In the beginning, even if they like each other, we should limit their playtime to thirty minutes per day.

After a couple of weeks, we can do two sessions a day and put their crates or cages close together.

Once we’re sure that the ferrets have become friends, we can put them in a ferret hutch together. These hutches are the perfect little ferret playgrounds and come in handy when there are two or more ferrets in the house.

Of course, before we do any of this, we should desex the male before he’s sexually mature. That way, he won’t become aggressive later on or try to harm the other ferret.

One thing to keep in mind is that introducing ferrets and grooming their relationship can be a tricky process. Some pets get used to each other in a couple of days, while others might take a few months.

But it’s important to follow the rules listed above and not rush the relationship or stress out either ferret. It might take some time, but with lots of love, there’s no reason for the ferrets not to become friends.

So, do male and female ferrets get along, and if they don’t, what can we do to help? Well, as long as the male’s been desexed, the two furballs will get along just fine. However, preferably, we should spay and neuter both ferrets, because that’ll ensure that they have a long and healthy life.

My son Bobby and I hope we have answered your question: Do Male and Female Ferrets Get Along.

We have been life-long ferret breeders and owners for all of our adult lives. (Read about us) and have gone through every single question that ferret owners may want to be answered.

We have put together the most complete guide to ferret care and is ideal for experienced and new ferret owners alike.

You can gain immediate access to our guide right now by clicking here. 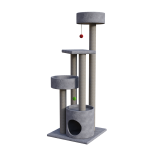 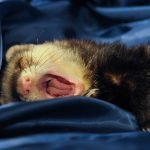