Do Ferrets Get Jealous?

Ferrets make great pets. They are one of the most sociable animals on the planet and when they get attention from their owners, they will quickly form a strong bond. If you’re looking for a pet that can also be your best friend, then a ferret is an excellent choice.

However, owing to the fact that they are highly sociable and require a lot of attention, it can be difficult to place your attention elsewhere without your ferret noticing this.

Ferrets may not experience an emotion that mimics human jealousy but since they are highly territorial animals, they may become upset if you place your attention elsewhere. Moreover, they might not like to share their space with newcomers since, in the wild, these animals will fight for dominance over a particular area.

This doesn’t mean that they won’t live happily in groups, because they will. In fact, most experts would agree that pet ferrets should never be kept alone. However, they may take dominance over certain areas of their enclosure or even specific items like toys and blankets.

Is My Ferret Jealous?

If you keep more than one ferret then you might notice that one becomes much more interested in you when you are fussing the other. It’s almost as if they have developed FOMO (fear of missing out) and will run up to you, trying to join in on the interaction. This is quite a playful reaction to the emotion and is nothing to worry about. Just be sure to give your ferrets equal attention and you’ll likely live in harmony all together.

However, there may be times when your ferret becomes jealous of its cage mates or even other pets like a cat and begins to act aggressively. This is more common when the ferret feels as though its territory is being threatened so many occur when introducing a new pet into the mix.

One of the biggest problems faced by ferret owners is that they may struggle to introduce a new ferret into the mix, especially if the first one has had ultimate control. There are horror stories of the original ferret launching an attack on the newcomer or getting very upset if the owner pays attention to its new cage mate.

But it isn’t impossible to introduce a new ferret, you just have to make sure that you go about it in the right way. Whatever you do, don’t attempt to immediately place the new ferret into the old ferret cage. This will feel like a huge invasion of territory and is the best way to make a fight break out; nobody wants that!

Instead, you should bring the ferrets together on neutral ground and be there to supervise while they suss each other out. It is best to start by allowing them to sniff one another and determine whether they want to make contact. If they show any signs of aggression or upset, give them a break and try again later.

If they do seem to want to get better acquainted then great! They may wrestle one another but this is totally natural and is the ferrets’ way of working out who is going to be at the top of the pecking order. The only time you’ll need to intervene is if things get out of hand. It’s also worth noting that the ferrets may urinate during this introduction so it might be best to do this on a hard floor or surface that is easy to clean.

Once the ferrets have initially bonded, you will want to keep them separate for the time being. Set up playdates a couple of times a week until they become bonded. It is essential to always supervise these sessions.

How To Tell If A Ferret Is Upset

The most obvious sign that a ferret isn’t happy is that it will become aggressive. When we are talking about feelings of jealousy, this aggression will typically be shown towards another ferret that it feels is getting in its way.

In other cases, ferrets can become upset and display behaviors that are a little more subtle or that could be confused with other things. A great example of this is that the ferret may become very inactive and refuse to interact or play. You might also notice that they go off their food.

Sometimes, ferrets who are feeling threatened or upset may begin sleeping with a toy. There’s a chance that they would do this anyway but if this is a new behavior that is coupled with other signs, it could be your pet’s way of making himself feel safe.

Sometimes ferrets who feel threatened or upset may start acting confused. They may run around with seemingly no clear aim and it is not uncommon for them to start soiling inappropriate places.

Ferrets may not experience or understand jealousy in the way that humans do but since they are very territorial animals that love to interact, they may become upset or even aggressive when they feel as though their space is being invaded.

For bonded ferrets, there won’t usually be any jealousy aside from wanting equal attention from the owner. However, when you bring new ferrets into the mix, there is a chance that aggression will soon follow. Be sure to introduce new ferrets gradually and always under strict supervision. 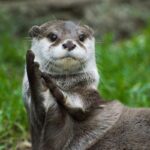 Why Is My Ferret So Itchy? 7 Common Causes And Solutions 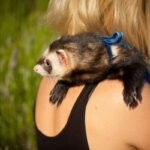